Photocross sessions is a chance for me to take a step away from mass producing images of every racer at a track, and focus more on the beauty that lies within the relationship between a rider and their bike.  This is more than just cool photos, it's finding the artistic side of the sport and the surrounding landscape.

I've been shooting moto for years.  I've been to the tracks, fired off hundreds of thousands of frames, and only a small fraction of those images do I genuinely get stoked about every time I look at them.  Typically it's the fastest guys on the track; the ones that have flair, cool gear, mirrored goggle lenses, and ass-loads of style.  I wanted to get away from the crowded scene of the local track, and go to the riders personally and find out where they ride during the week.  Find them on a track where they are the only one out there, and get an intimate look into they're stylish ways.  This is mostly a personal project.  A project that I can look back on and be 100% excited about years down the line.

My goal for you, as the viewer, is to display photos that will make you want to go out and ride.  I want my images to give you the same feeling that watching a well made moto movie gives you.  Pieces of art that make you continue to stare at and take in the details, rather than continue scrolling to the next page.

LcatMX camps are quickly becoming my favorite motocross related thing to photograph.  The camps give me a chance to capture the relationship between the instructors and the students.  Add in fun games, friendly people, and great motocross talent all into a 3 day period, it's a recipe for great images and story telling.  All of these reasons are why I chose the Lcat program to showcase in my newest installment of Photocross Sessions.

I decided to take Monday and Tuesday off from my day job of making envelopes to make the trek down to Albany MX.  After a Sunday morning and afternoon of hiking with my Wife, Ashley, I headed south to the track.  I showed up at the track around 8:30 and immediately started setting up camp.  I always feel like the odd man out when I show up to the track and pitch a tent amongst all these huge trailers and motorhomes.  However, I'm a firm believer that sleeping in tents build character, and I like it that way.  Never being to this track before, I was unprepared for the less-than-ideal conditions the Albany MX ground- or should I say bedrock offered up for me.  The pits at Albany are all Gravel, and the ground underneath is hard as rock.  I did my best to sweep the rocks away from the spot I'd set my tent up at, but in the end, there were still a couple of stragglers riding up my back.  And yes, I did have a pad to sleep on.

Tent is setup, and I'm buzzing with excitement (and a little bit of redbull).  Sleep isn't really an option at the moment, so why not take some night photos?  It was pitch black, and I had no idea where the track goes, or even if I was on the track.  I Played with some timed exposures and lighting corners on the track.  The Lcat crew straight waterboarded this track in preparation for the hours upon hours of moto to come in the next 3 days, so walking around in some spots was very treacherous.

In my hurry to leave for the track Sunday evening, I made a critical packing error:  NO TOOTHBRUSH OR TOOTHPASTE!  Had to make an early morning run to the local Walmart and get my supplies.  Once I was feeling minty fresh, I went walking and found Tyler Holweger putting up ribbons, so I put the camera down and helped out.

About a dozen tiki torches staggered all over a large sandpile burn in the early morning light, and the black smoke coming off the flame looked like something out of an action movie, so I grabbed Ryan Martin and had him pose next to the torches for a cool shot.

Morning introductions get underway with Landon on the mic.  The instructors for Fall Camp are:  Landon Currier, Alyas Wardius, Austin Ulrich, and Brett Cue.  Each instructor gets their time on the mic to introduce themselves and welcome everyone to camp.

I focused mostly on the big bikes Monday, and for good reason, they were ripping!  There was a huge rut forming in a far corner, and I fired hundreds of frames in that spot.

By the end of the day, riders were beat.  Rather than pulling up and listening to the instructors intently, helmets were now resting on crossbar pads, and attention was fading.  5:00pm came around and class was over for the day, but the festivities weren't over yet.

After I ate my dinner, I went out looking for something to shoot.  I found some young rippers hanging out and asked if they wanted their photos taken.  I got the usual strange looks, but assured them that it was legit.  I had them line up and look tough for me.  "1..2..3" I count off, and as I fire my first frame, one of the jokers pants' the kid next to him.  Perfect timing.

Time for Dodgeball and the Gunnysack race.  I got right in the mix with the dodgeball match.  It was almost as if I was embedded in a combat zone as a journalist, but not.....

Dodgeball was cool, but the Gunnysack race was my favorite.  Not much to say, other than the winner got a GoPro, and the racing was action packed.  Check out the photos.

My last day at camp, and since I had a 2.5 hour drive ahead of me, I would have to leave around noon to make it back home for prior commitments.  Packed up the tent, and hit the track to shoot some more photos.

The dynamic duo of Dayton Daft and Bryson Steele, the very talented videographers for Motosport Inc, were on hand to video the action.  Cool guys, and very good at what they do.  You can always count on quality from them.  Can't wait to see what they come out with.

I had a lot of fun at Fall Camp.  I came home with some great stories, new friends, and great memories all around.  I thank all the Lcat crew; Landon, Justine, Tyler, Alyas, Austin, and Brett for being so cool and so hospitable.  I look forward to attending more camps in the future, and next time, staying for the whole thing.

Wish to view the rest of the photos?  Click here->  http://www.jesses-photos.net/f56786819 and enter your rider number in the keyword search.

Taken at the Devol Racing test track in Enumclaw, nestled in the foothills around Mount Rainier.  Carson Brown was a rider that I've wanted to work with for a while, and I finally got the chance recently.  The Devol test track was a picturesque location for this shoot. 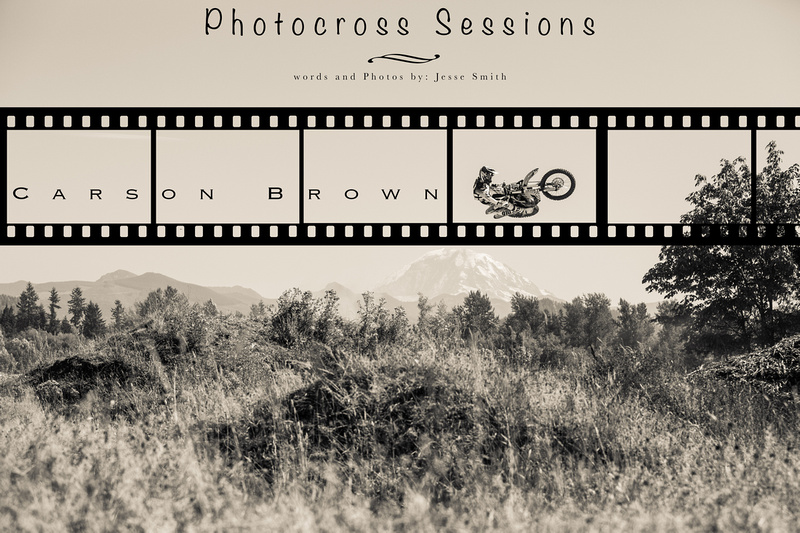 Photocross Sessions: Carson BrownCarson throws a whip over the overgrown landscape of the Devol Racing test track while the glorious Mt. Rainier looms in the distance. 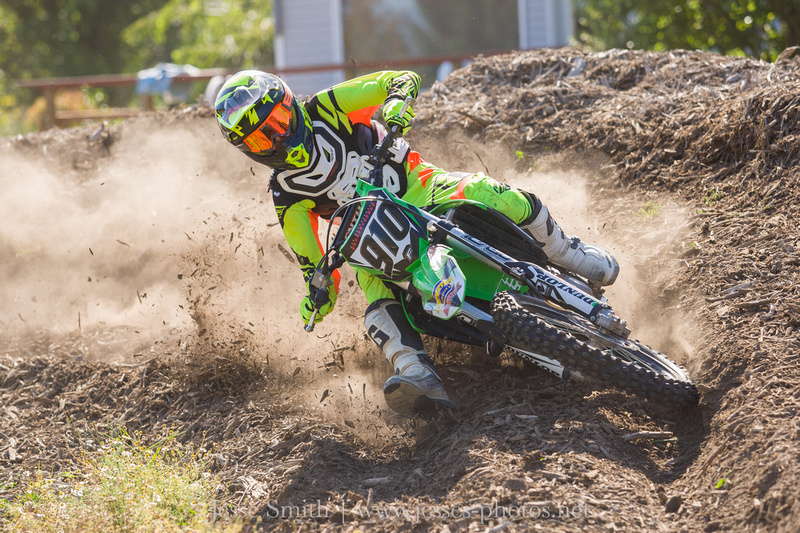 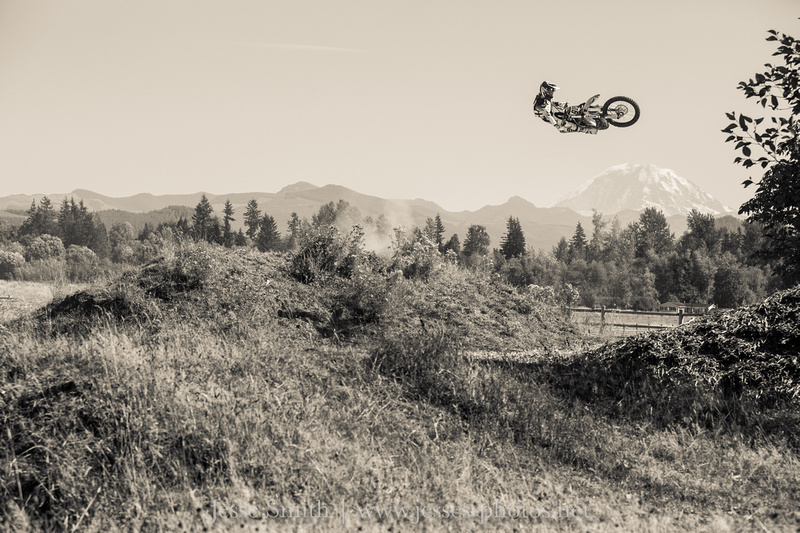 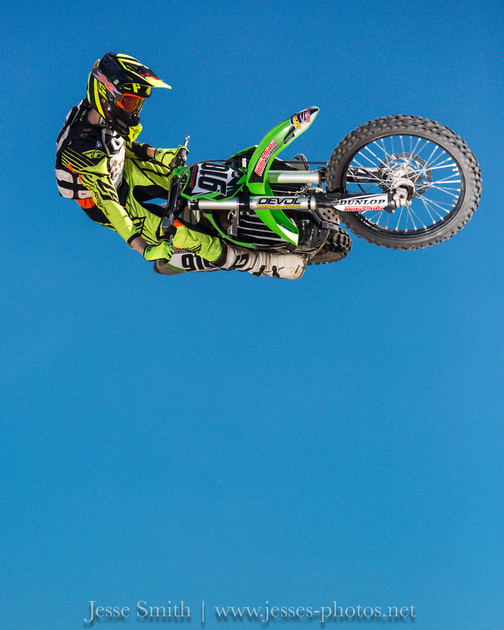 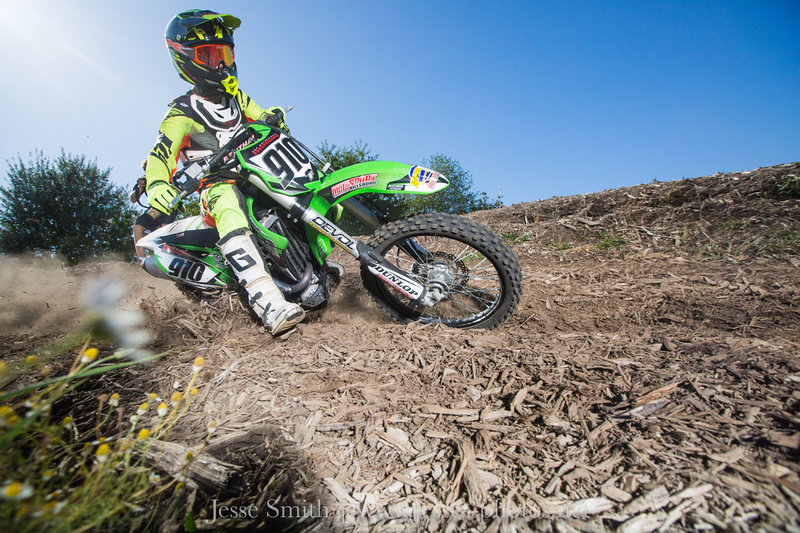 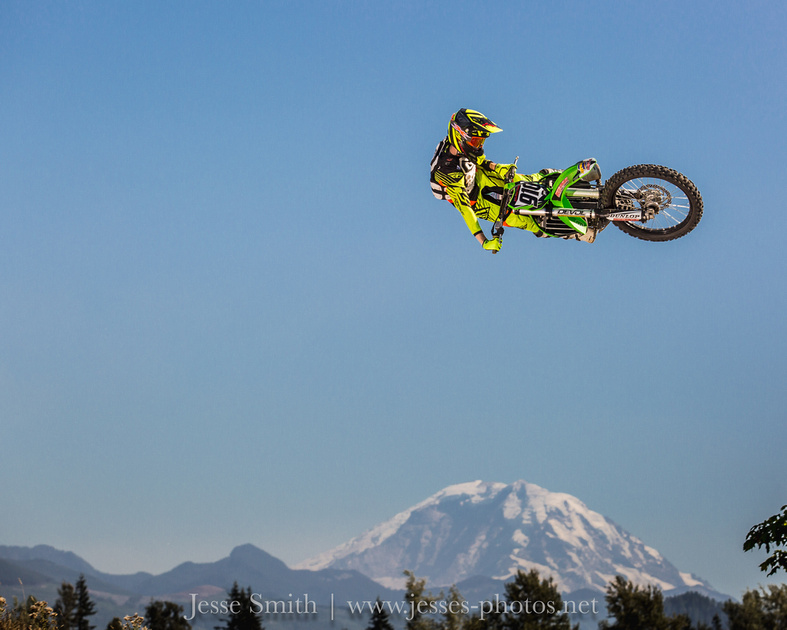 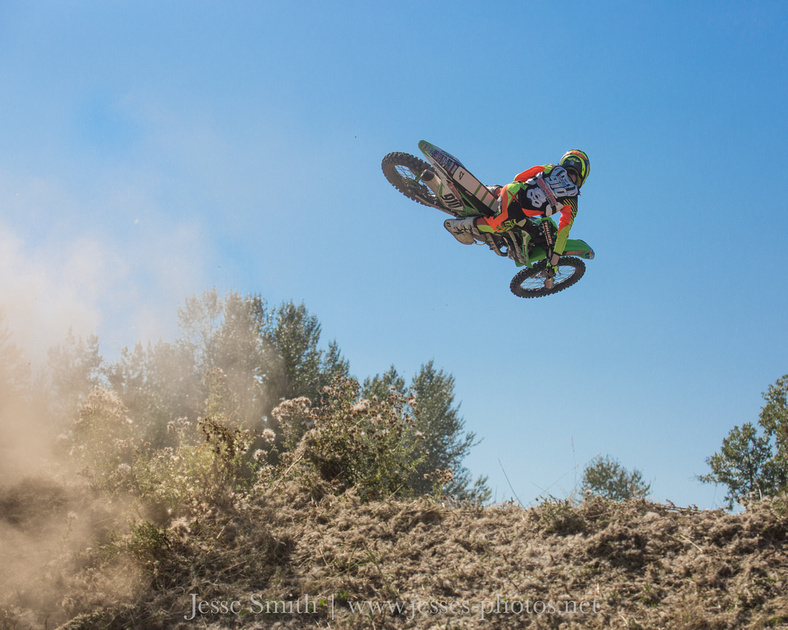 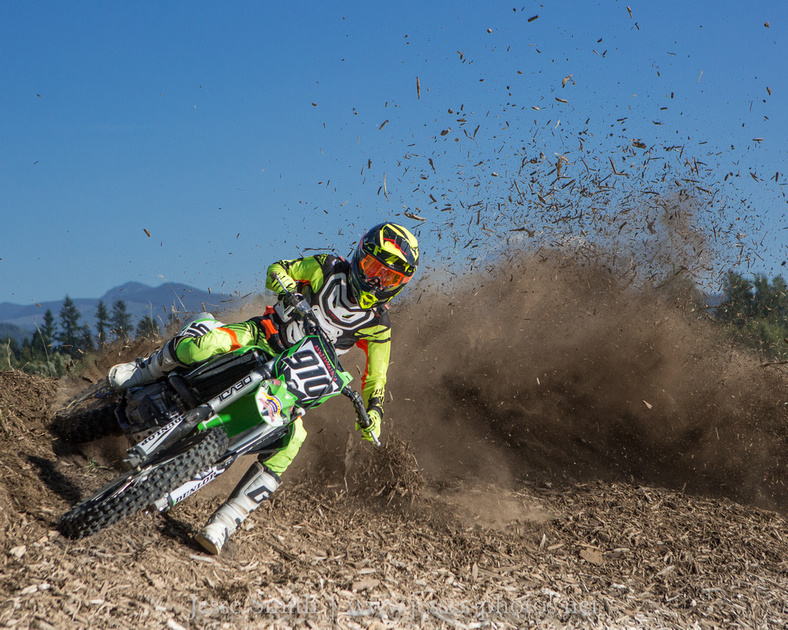 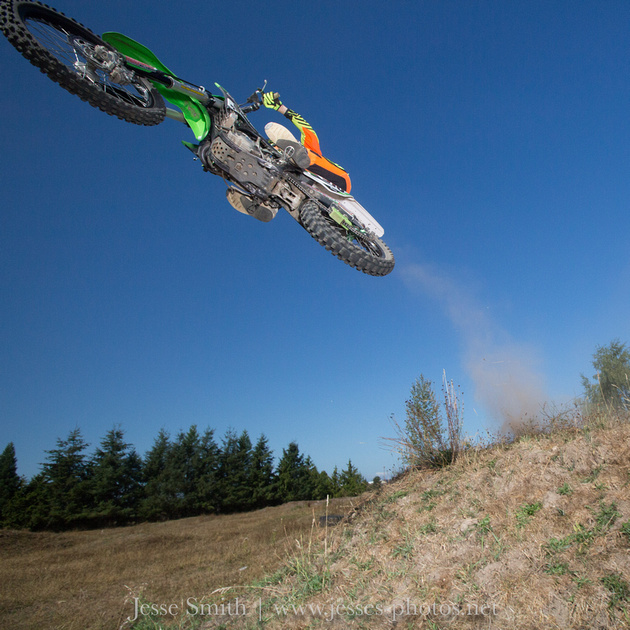 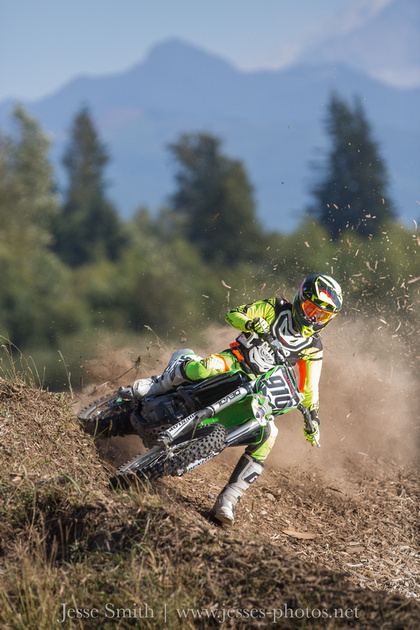 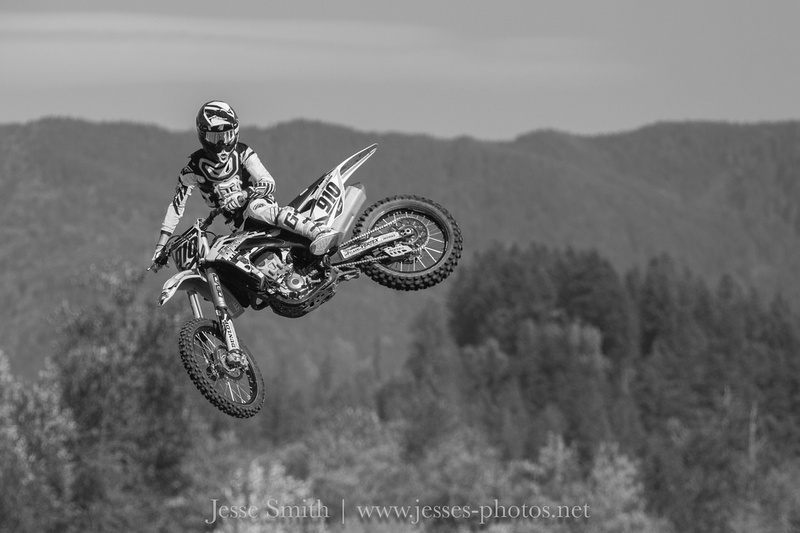